Forgiveness - To Set You Free

Like the majority of humankind, I was never into forgiveness. It was a pleasure keeping grudges in mind, dwelling over them again and again and wallowing in self pity and vengeful thoughts.

Then, one not-so-fine day, I started having severe pain in my lower abdomen region. The family physician recommended x-rays of the abdomen, which revealed kidney stones. The pain was so severe that I had to take two pain killer tablets every day, one in the morning and one in the evening.

Allopathy does not offer any cure for kidney stones excepting surgery. However, after the removal of kidney stones by surgery or blasting them into powder by sonic waves, there is no guarantee that the stones will not return. I started with herbal medicines which are said to be effective but take a long time to cure. 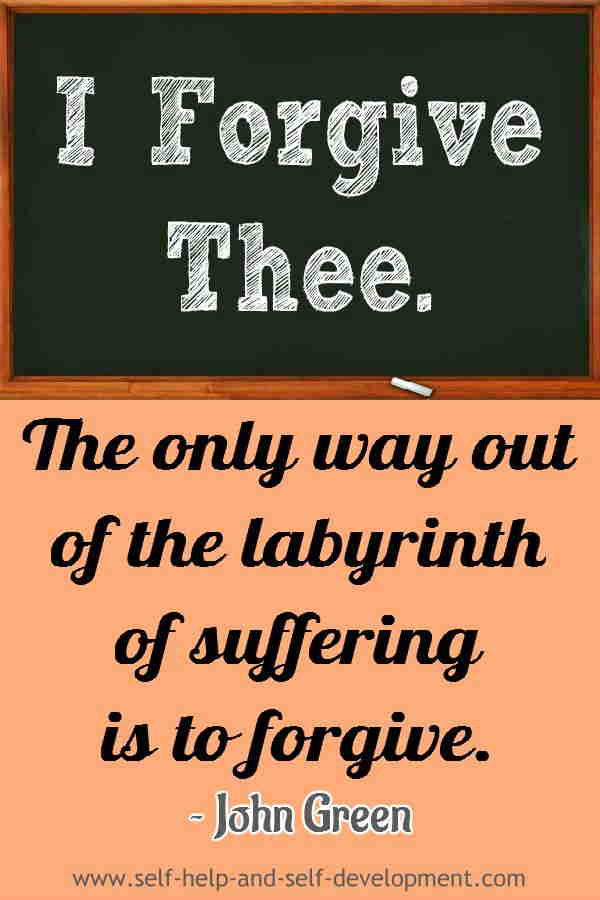 How painful are kidney stones? It has been found that women who have had kidney stones and also severe labour pain, have said that they prefer labour pains over kidney stone pains. No wonder that for nearly six months, I had to take two pain killer tablets daily.

In the meanwhile, I read some articles and books about the power of forgiveness. One important thing that I learned was that when we get angry on someone and keep that grudge within us, it harms us and not the other person. Remaining continuously in a state of anger releases harmful chemicals in the body and whom are they going to harm except us?

A wise person has said, “Getting angry or vicious about somebody and thinking bad thoughts about them is like drinking poison and expecting the other person to die.” How appropriate!!

I know from personal experience that forgiving is more easily said than done. But what’s the harm in trying forgiveness?

Some years back, I had been cheated or felt I had been cheated, by a person on whom I had total faith. In fact, I had left a very well paying job and joined him in his business. I had worked extremely hard for more than five years, during which period the business sky rocketed. However, I was not paid what I was promised and in a huff I had left the business and had to start my life all over again. All these years I had maintained a very severe grudge against this man. God only knows how many times I had mentally tortured him. The result, I believe, was kidney stones and the subsequent severe pains.

Then, in another book I read the process of forgiveness. Thought I would give it a try. Did it and, wonder of wonders, the pain stopped from the very day I completed the forgiveness procedure. It’s many years now and to this day I have never had recurrence of that pain!

There are many ways of forgiving. The procedure that I followed was as follows: One day, I got up early in the morning, and after toilet, etc. I lay in a comfortable chair. As I know self hypnosis, very soon I went into a deep relaxed state. (If you do not know self hypnosis, simply close your eyes, take some deep breaths and count backwards from 50 to 1. This will help you concentrate into relaxation. Or, use the self hypnosis script on the web site. What is important is the intent. Simply closing the eyes and taking deep breaths also will take you in a state that is sufficient for the purpose)

I now visualized the person as I knew him. I then approached him, shook hands with him and thanked him for giving me an opportunity to work with him. I also thanked him for all that I had learned while working with him and wished all the best for him, his family and his business. I next visualized him becoming extremely successful in his business and attaining all that he wanted to attain. I ended my visualization by seeing him being felicitated by a large group of people and he being very, very happy

The whole process lasted for about forty five minutes. I was in a very deep state then. After coming out of the state, I went back to sleep. It was after getting up that I realized that the pain was gone.

For some, it may take a few sessions to get the desired result. And the desired result is not just about alleviating pain. It has many other ramifications too. Maybe you are in some kind of financial difficulties. Are you wishing poverty or business loss to someone? Maybe you are going through a difficult relationship. Have you been mentally cruel to someone or have been directly or indirectly responsible for hurting anyone? Think deeply and you will find something that you have done which you should not have. Then go in for forgiveness and see the wonders that it will bestow upon you.

Learn to forgive completely with this professionally-recorded hypnosis MP3 download.